A voice message from Eugeni from Barcelona
Episode 149

“By no means will Eugeni stop listening to us!”
Keep on rocking!

Email from Antonio from Badajoz

Hi Reza and Craig! It’s Antonio again with another question for you.
Watching movies in original version, I’ve realised that a lot of times, I can hear the expression “How would you like…?” followed, for example, by either “a punch in the nose”, or “being left by a woman that way” or something like that.
I gather it’s some kind of complaint or threat, but, since I can’t entirely get my head round it.
I’d love you guys to shed light on that if you please.

Thanks in advance! hugs from Badajoz!

Comment on the blog about the farming episode 155 from Nayabet who’s on a farm in New Zealand.
Thank you so much guys for this podcast, it will be really useful for me, in fact, I work on a dairy farm here in NZ and I’m a bit familiar with this (these) words but not with all of them.
So thank you once more.

Voice message from Lyan from Panama
Free courses and resources on Mansioningles.com and on our Facebook page at Facebook.com/mansioningles

Jose’s True English Story
These stories began with episode 137 on how to tell a story in English:

Comprehension questions
1. How old was Jose when the story happened?
2. Who had drowned in the chanal in the past?
3. How long did the incident take from start to finish?

Now listen to Jose’s story and answer the questions

1. How old was Jose when the story happened – 10
2. Who had drowned in the chanal in the past? – gypsy children
3. How long did the incident take from start to finish – 30 seconds

Corrections
XX (it)
XX (All of us had been forbidden to play close to the canal)
You know how children are (good word order)
Pronunciation of ‘drown’ and ‘water’
XX (runs underground)
XX – I realised that I was approaching the tunnel. 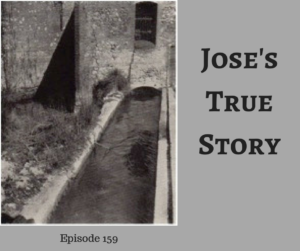 I was living in the outskirts of Valencia, in the same city where I’ve always lived. Close to my home flowed one of the seven main channels in this city. Its water was used by a big paper factory, therefore the channel passed into the factory by a tunnel where there were two enormous wood blades rolling constantly in order to break up the things that the water dragged.

Back then, the children we played on the street all our free time and naturally all of us had forbidden playing (had been forbidden to play) close to the channel. But you know how children are because you have also been two of them not very long ago.

One day, we were around this forbidden place and the channel was so fast-flowing because of the previous rainy days, that water was on the edge, almost overflowing. I was walking on the edge admiring the speed and strength of the water when I slipped and fell into the water. My friends started to yell my name because they wanted to help me, but they couldn’t because the water ran speedily and swept me along very quickly. I tried several times to reach the edge to get out from the water, but I couldn’t.

However, the volume of the water was so high that my small body hit into the top of the tunnel and it stopped me for a few milliseconds and gave me time to reach the edge and get out from the water when my legs were already into (in) the tunnel. All of it happened just in around thirty seconds, no more.

When my parents were told about that, they didn’t scold me. Just gave me a huge hug and they thank God THAT nothing bad had HAPPENED to me. So, I could survive this way from a certain death from drowning. Surely I had still a lot of things to do in my life.

Of course, we never went to play near the channel again, at least me.

A few years later this channel was covered because of the city development, and nowadays the water is running underground.

Recap – What makes a good story, like Jose’s?
An accurate mix of verb tenses. eg past simple V past continuous V present perfect, etc.
A varied, interesting range of vocabulary, including expressions/idioms
Using detailed, descriptive language, especially adjectives and adverbs
Using linking expressions. eg. contrast (although, etc); addition (on top of that, etc.); time (afterwards, etc.); consequence (as a result, etc.); reference (as for, etc) and so on.
Using suspense, drama, mystery, shock, and other emotions that grab the reader’s attention

…and now it’s your turn to practise your English. Do you have a true English story to tell us?
Send us a voice message or record it on your computer and send it to us by email. https://www.speakpipe.com/inglespodcast Emails to craig@inglespodcast.com or belfastreza@gmail.com.

On next week’s episode: Vocabulary: The Environment