Email from Tania from Valencia
I’m writing to you because I heard the message in episode 158 from Alba (Alex Perdel’s Podcast Aventura Bilingue) about talking to her baby in English and I thought that maybe you would find interesting the project I’ve been working on in Valencia for the last two years and might like to share it with the rest of your listeners.

(Tania is an English teacher who wanted to raise her child bilingual. She thinks that children begin learning English too late and that parents should be introducing their children to English from 0 to 3 years old – “the critical period for language acquisition”).

Tania’s project is called English4families (Escuela de Padres) and she says that  “The parents don’t need to have a very good level of English because I help them with all the difficulties that may arise regarding grammar, pronunciation and so on during our monthly meetings…..I teach daily routines, games, songs, activities…to the parents so that they can use them during the month at home with their kids. (I don’t teach English to the babies, but the parents do!)

If you want to know more about it: http://www.english4families.es/
(paid service? – they are not a sponsor)

Voice message from Miren:
Hanging out in ivoox
I came across this podcast
I got hooked on them
Words don’t come out smoothly
Some words are a bit of a mouthful for me
Repeat loudly some words and expressions you hear on the podcast. 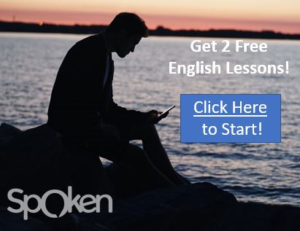 English Lessons on WhatsApp for Professionals.

What are disfluencies, filler words or discourse particles?
Um…., er…, erm….
Restarted sentences. That’s when you…..That’s when you restart a sentence. So you….So you start….
Repeated words – when you, when you, repeat er…repeat
Silent ………………..pauses 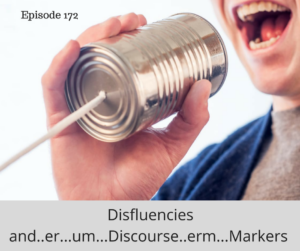 Long vowel sounds in theeeeeeeee words you say
Repeated syllables…..I…I..It can happen oc..occasionally, I mean, so…sometimes
When someone does this a lot and/or over a long period or permanently, we say that they “stutter” or “stammer”.

Stuttering/Stammering is often deliberately used for comic effect in English (and Spanish and probably all languages). The humour often lies in the expectation of a swear word or “dirty word” to follow a pause or repeated syllables, which turns out to be a different “clean” word.
In Spanish, for instance, you can call someone “hijo de la gran….(pause)….Bretaña”! What did you think I was going to say?!

Why do we use them?
It’s difficult for the brain to plan what we’re going to say, and then say it, at the same time.

Your brain is constantly making decisions on what to say next.

We communicate our thought process to the listener as we try to change the direction of the conversation or look for the right word.

Are they bad? Do people look down on them?
Craig blames radio for giving us a false perception of what natural speech sounds like.

Public speakers train themselves not to use disfluencies. Toastmasters International frown upon (to frown upon/disapprove – ver con malos ojos) disfluencies

They make you sound human
We’re not all perfect
Can you use them too much?
We don’t want to sound like computers

We’ve spoken about discourse markers in writing:
firstly
in addition
moreover
on the other hand
in conclusion, etc…

Discourse markers in speaking
Well,
I mean,
Like,
Y’know..
So,
Right,
Anyway,
Mind you,
Oh, etc…

actually, basically, literally, like, etc…
These often do not add anything to the meaning of what we are saying – ‘I’m literally starving.” – “Basically, I can’t meet you after work tonight.”

Reza: What are you doing this weekend?
Craig: I’m thinking of going for a beer and a pizza with Steve and Jimmy for a boys night out. Wanna come along?
Reza: Yeah, sounds great! Those boys can really drink a lot. I’ve got class on Saturday morning.
Craig: That’s no problem. We’re going out Saturday night, not Friday night.

With discourse markers – Can you notice them?

Reza: So, what are you doing this weekend?
Craig: Erm…well, I’m thinking of going for a beer and a pizza with Steve and Jimmy. Y’know, a boys night out kinda thing. Wanna come along?
Reza: Yeah, sounds great! Mind you, those boys can really drink a lot. I mean, I’ve got class on Saturday morning, so…erm….I don’t know……
Craig: Oh, that’s no problem. We’re like going out Saturday night, not Friday night.

What are the disfluencies in Spanish?
Are you aware of your disfluencies?
How can you reduce them in English? – record yourself, slow down, ask someone to listen to you and give you feedback

…and now it’s your turn to practise your English. We want you to answer this question What are the disfluencies in Spanish? What words, sounds or verbal discourse markers do you use when you speak Spanish to help you collect your thoughts. But try to record your answer in 90 seconds or less, in English AND without using any disfluencies in English! (music on pond5.com) https://www.speakpipe.com/inglespodcast

We want to thank Arminda from Madrid, Alberto from Granada and Angélica Bello from Madrid for their help in transcribing past episodes. We now have full transcriptions for episodes 131 to 142, and episodes 1, 2 and 3. Congratulations to Alberto Gómez who has recently been promoted and is getting married!

On next week’s episode: British Castles