What were the last words of Elvis Presley? What did John Lennon say before he died? Famous last words and idioms this week on…….Aprender Inglés con Reza y Craig

It’s a great idea to talk to your baby in English.

iTunes review: Thank you! This is the best podcast I ever found. Good work! It’s very helpful. I found you three weeks ago and now I’m addicted.
by Aldroper from Spain

Voice message from Josep from Barcelona
The Phrase Finder: http://www.phrases.org.uk/ 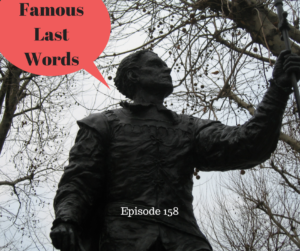 It’s better to burn out than to fade away.”

Elvis Presley (1935 – 1977)
Towards the end of his life, at his last press conference, amongst the final words he said in public were: “I hope I haven’t bored you.”
Elvis took an overdose of drugs and he said to his fiancée “I’m going to the bathroom to read.”

Buddha (AKA Siddhattha Gautama)  circa 563BC – circa 483BC
“Work hard to gain your own salvation.”
He also said, “Behold, O monks, this is my advice to you. All component things in the world are changeable.”

George Orwell’s last written words were, “At fifty, everyone has the face he deserves.” He died at age 46.

Leonardo da Vinci was very modest. He said, “I have offended God and mankind because my work did not reach the quality it should have.”

Sir Winston Churchill’s last words were, “I’m bored with it all.”

As he was dying, Alfred Hitchcock said, “One never knows the ending. One has to die to know exactly what happens after death, although Catholics have their hopes.”

Groucho Marx’s final quip (witty remark) when he was dying was:
“This is no way to live!”

Ernesto “Che” Guevara’s last words before execution, after being taken prisoner:
“I know you are here to kill me. Shoot! You’re only going to kill a man!”

Karl Marx, German philosopher, (1818 – 1883):
When asked by his housekeeper what he wanted his final words to be, he said: “Go on, get out! Last words are for fools who haven’t said enough!”

Put the cart before the horse – Reverse the accepted or logical order of things. – eat dessert before the main course or decide what to wear before you’ve been invited to the party.

Get off scot free – completely free from obligation, harm, or penalty
“The bank robbers got off scot free” – nothing to do with Scottish people. It comes from not paying taxes!

Back to square one – back to the beginning, start again

Over the moon – very happy or delighted

We want to thank Arminda from Madrid for continuing to transcribe full transcriptions.
There are now full transcriptions for episodes 131, 134, 135, 136, 137, 138, 139 and 140.
Thank you also to Alberto Gómez from Granada who has kindly transcribed episode 132 on Linking sounds

If you would like all of our episodes transcribed, go to https://www.patreon.com/inglespodcast
If you are a sponsor and have a job interview in English soon, there’s a free pdf and mp3 of our How To Pass a Job Interview e-book on the Patreon page