I know we said that we would be talking about sex this week, but we’re going to talk about the theatre and theatre vocabulary instead. We hope you won’t be too disappointed!

A book recommendation from Francisco from Úbeda – Books for reading, episode 177.
For level B2 I strongly recommend reading:
Terry Deary´s Horrible Histories collection (20 amusing and short books)
Lemony Snicket’s A Series of Unfortunate Events (various books, aimed to children but worth reading)
That stuff helped me a lot, it´s aimed to (at) teenagers in general, but it´s appropriate for Spanish B2 students.
Another brilliant writer: Paula Hawkins: “The girl on the train” and “Into the water”. Both written in an intelligible style.
Cheers! – Francisco.

Comment from Ana on the website:
Hello Craig and Reza, I’m Ana from Mexico
I have a wonderful book to recommend, Three dark crows by Kendare Black the genre is fiction but the story is very interesting – I love it, also is very easy to read. (It is also….)

Comment on the website from Marcelo
Just to tell you my current experience reading books in English.
Some time ago I bought “My Friend Muriel” (by Jane Duncan), a shabby yellow paperback.
At last I started to read it. Maybe there are a lot of Scottish words and also old ones, but I think I’m able to understand the core (núcleo) of the writing and that is rewarding.
Besides, I can write, paint and even sneeze on it, for it’s very old to be resold. (note that Marcelo’s uses ‘for’ and not ‘as’ or ‘because’).

We recommend these books if you want to study phrasal verbs:

Emiliano sent an email asking about some grammar points. He uses the app, so he didn’t know about the search box on the website. In his email Emiliano said he’s he’s received negative comments on his pronunciation.
Emiliano also asks about immigration laws, taxes, tips which he should have into account (take) if he decided to move to the UK? Beatriz Ramírez from http://destinoreinounido.com/
http://www.inglespodcast.com/bea 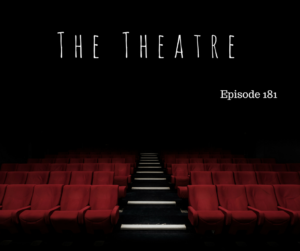 To put on a play
The set / props
Script
To learn your lines
Stage
Scene – small part of a play (or film/TV programme)
Act (noun) – a group of related consecutive scenes
Eg. I love Act 3, Scene 2 of “Othello”
Soliloquy – monologue when a character says his or her thoughts aloud
Rehearsal / to rehearse
Dress rehearsal – final rehearsal(s) with complete costumes, props, set, etc.
The orchestra pit
Front row seats
A standing ovation
Take a bow
Curtain call
To bring down the house
A good/bad review
Critic
Amdram – amateur dramatics
To break a leg – good luck
Ad lib – spontaneous words not in the script
Backstage
Cast – the actors
Casting – selecting the actors
Centrestage
Off stage – opposite of on stage
Green room – area where actors get ready backstage
Stage directions – script instructions of position and movement for actors
Cue – an indication, spoken or visual, in a particular place
To Prompt/a prompter – person offstage who whispers the forgotten lines
Playwright – person who writes plays (eg. Shakespeare)
Understudy – actor who prepares in case s/he has to substitute another actor
Stage fright – when an actor is nervous about performing
Thespian (old-fashioned) – actor
To upstage someone – to perform more memorably than another famous actor (eg. the unknown actor playing a minor role upstaged Helen Mirren playing The Queen)
Stage hands – those technicians who help set up the stage
Footlights – lights at floor level on the stage
Spotlight – the big main light focused on the most important actors on stage
The wings – the sides just beside the stage. Waiting in the wings – waiting just offstage ready to enter the stage (often used metaphorically)
eg. When Lenin died, Stalin was waiting in the wings, ready to quickly take centre stage.

Craig’s recurring nightmare about not knowing his lines and having to get up on stage.

‘The sunrise recurs.’
‘I think the ice-age will reoccur eventually.’

Discussion
Have you ever been involved in a theatre production?

Do you enjoy going to the theatre?

Can theatre really affect society and the way we look at things?

If someone wrote a play about your life, which famous actor would you choose to play the role?

Do you agree with what Shakespeare wrote in his play As You Like It:
“All the world’s a stage,
And all the men and women merely players;
They have their exits and their entrances,
And one man in his time plays many parts…”?

…and now it’s your turn to practise your English. Are you involved in the theatre, like Gabby.
Do you have any recurring nightmares that you don’t mind telling us about? Which famous actor or actress would you choose to be you in a film or play?
Send us a voice message and tell us what you think. https://www.speakpipe.com/inglespodcast

Patreon news
Full Transcripts of our podcasts available on Patreon (Angelica Bello is translating one per week) and How to Pass a Job Interview mp3 and pdf and your questions answered.

The transcriptions that were done for free by Arminda, Alberto from Granada and Angélica will still be available (episodes 131 to 142, and episodes 1,2,3, 4, 5, 6, 7). Patreon subscribers will now get additional transcripts.

On next week’s episode: DIY and Home Improvement