Will, Australian colloquial English, idioms and your questions – AIRC34

Manen from Huesca.
Hello
Thank you for your podcasts, especially this one, I live in Huesca at the Pirineos but I usually go to Madrid to see my family and there I knew (CORRECTION: MET) some people from Galgos112, 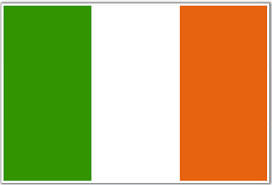 The Flag of Ireland

I love dogs and especially galgos I think they have pity face (CORRECTION: THEY HAVE A PITIFUL FACE), also I´m an IT worker normally as a teacher,so… these episodes have been perfect…

besides, you´re so funny I love when you say spanish words with “rr”.
I love to hear you two when I’m going to run, so I can run without noticing it.
I wonder if you can help me with one thing. I say it in Spanish so maybe you can help me better.
Como puedo decir “Voy a intentar leerlo” o ” voy a intentar escribiros” en general ,”voy a intentar hacer algo….
Thank you so much , and sorry for my English write (CORRECTION: WRITING)…. I´m learning step by step…slowly

Voy a intentar leerlo = I’m going to try to read it.

Voy a intentar escribiros = I’m going to try to write to you.
You can see a photo of Berta and listen to the episode about ‘los galgos’ (greyhounds) in Episode 28

Mario J. Flores (FACEBOOK)
Hi, everyone!!
I need your help, does anyone can tell me (CORRECTION: CAN ANYONE TELL ME) For more help with modal verbs, listen to Episode 23

What’s the official Northern Ireland’s flag? because I got confused when I saw that there are two, the one that is the same as the United Kingdom and the green, white and orange.
If someone could help, I’d be very grateful. Thanks!

In Northern Ireland people are obsessed with flags!

The red hand of Ulster

The crown (la corona) in the flag is controversial (polémico, controvertido). It represents the queen (or king) of the United Kingdom.

The flag of Northern Ireland stopped being official in about 1973.

On official occasions, and outside official buildings, the Union Jack is used.

Both pronunciations are correct. It doesn’t matter.

Don’t use ‘will’ for future plans or arrangements, use ‘going to’ or the present continuous: 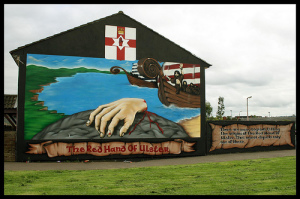 Will is an auxiliary modal verb.

Will does not have an ‘s’ in the third person.

The negative of will is ‘won’t’ (will not)

Use will to make predictions: “Do you think there will be a referendum in Cataluña?”

“Going to” can also be used for predictions, but usually when there is EVIDENCE. For example, “Look at that huge black cloud in the sky, I think it’s going to rain.”

Who do you think will win the next World Cup?

Use will to express certainty (certeza) or confidence.

I’m sure you’ll (you will) agree that Ecuador is a beautiful country.

Ahh, that’ll be the postman! 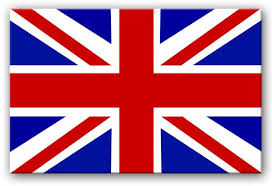 The Union Jack (the flag of the United Kingdom)

She won’t marry me. She doesn’t love me anymore.

Use will for spontaneous decisions.

I’ve got tea and I’ve got coffee. Which will you have? – I’ll have a cup of tea.

I think I’ll have the fish.

Will for willingness (buena voluntad, dispocición)

If you are WILLING to do something, tienes voluntad de hacerlo.

I won’t meet Paul. I hate him. I just will not talk to him.

Craig, Im afraid I won’t be helping you hoover the flat today.

“Like water off a duck’s back.” – without any apparent effect. It doesn’t matter to me.

I can’t believe this. This morning I had a flat tyre. When I went to the garage to get the tyre fixed, I discovered I didn’t have any money, and I couldn’t even charge it because my credit card’s expired.
It never rains but it pours!
Send us an email, or a sound file (mensaje de voz en mp3) with a comment or question to craig@inglespodcast.com or belfastreza@gmail.com.
The music in this podcast is by Pitx. The track is called See You Later – licensed by creative commons under a by-nc license at ccmixter.org.