In this episode we’re going to help you increase your vocabulary around taking drugs and addiction. 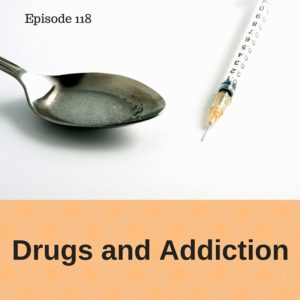 to be addicted to

to have an addiction (to)

“Addiction is a condition that results when a person ingests a substance (e.g., alcohol, cocaine, nicotine) or engages in an activity (e.g., gambling, sex, shopping) that can be pleasurable but the continued use/act of which becomes compulsive and interferes with ordinary life responsibilities, such as work, relationships, or health.

Users may not be aware that their behavior is out of control and causing problems for themselves and others.”

abstinence – A deliberate decision to avoid harmful behaviors, including sexual activity before marriage, tobacco, alcohol, and other drugs. (verb – to abstain from doing something)

addictive drug – A substance that causes physiological or psychological dependence.

psychological dependence – A condition in which a person believes that a drug is needed in order to feel good or function normally.

physiological dependence – A condition in which the user has a chemical need for the drug.

stimulant – A drug that increases the action of the central nervous system, heart, and other organs.

nicotine withdrawal – The process that occurs in the body when nicotine is no longer used. (Cravings, discomfort.)

intoxication – The state in which the body is poisoned by alcohol or another substance and the person’s physical and mental control is significantly reduced.

detoxification – A process in which the body adjusts to functioning without alcohol.

euphoria – A feeling of intense well-being or elation.

gateway drug – A drug whose use increases the likelihood that a person will use other harmful drugs. Cigarettes, Marijuana and Alcohol are the 3 of these.

Overdose – taking too much of a drug which cause death

Withdrawal – Unpleasant reactions that occur when a person who is physically dependent on a drug no longer takes it.

“Hair of the dog” – A colloquial expression describing the (dubious) idea that the best way to cure a hangover is to drink a little bit more.

(to be) in denial

to chase the dragon

Should some drugs be made legal? Which ones?

Should alcohol or tobacco be made illegal?

Do you know anyone who has had addiction problems?

What are some of the characteristics of drunk people?

Is sugar addictive? What about tea, coffee, and chocolate?

What other things can people get addicted to?

Do you know how much alcohol is in beer/wine?/Whisky? – % proof

If heroin were legal, would there be less crime? For example, burglary and robbery.

Are some people more easily addicted to drugs than others?

Do some people have addictive personalities?

Craig has identified and recognised his addiction. But can he ever truly stay off dark chocolate?

…and now it’s your turn to practise your English. Do you have a question for us or an idea for a future episode?

Send us a voice message and tell us what you think. www.speakpipe.com/inglespodcast

If you would like more detailed shownotes, go to https://www.patreon.com/inglespodcast

On next week’s episode: Getting Dressed and Undressed
The music in this podcast is by Pitx. The track is called ‘See You Later’