Siestas and Sandinistas – An interview with Mel and Victoria – AIRC29

In this episode Reza and Craig are joined by Mel from the UK and Victoria from Spain.

Mel was born in London. She also lived in Kent, Manchester, Nottingham and Nicaragua. Now she lives in Galicia, Spain. (In a nutshell = en resumen)

Victoria was born in Ourense and studied in Santiago. She has also lived in Barcelona and Valencia. She mainly worked in bars for 14 years. Now she lives in a small hamlet (hamlet = aldea) in Galicia.

Most people work the land in the hamlet. There are no shops or businesses. People there grow grapes. It’s a very quiet, peaceful life. The grapes are sold to large ‘bodegas’.

Many people in the area have a pension from Switzerland from the days of Franco.

Mel works as an English teacher in Ourense.

She once went to Nicaragua. She fell in love with a Nicaraguan and went there in 1989. She stayed for a year and a half. It was just after the Sandinistas had lost the election.

She says that it wasn’t dangerous, but that people were very poor. There was a wonderful sense of community.

She remembers the heat and high humidity. They had powercuts (powercut = apagón, corte de luz).

There was petrol rationing (racionamiento) and two days a week without water.

The houses were connected. People argued when the electricity stopped and cheered (to cheer = aclamar) when it came back on again.

Mel loved the community feeling. A fat neighbour used to sit in a rocking chair (mecedora) outside her house and tell stories to the local children.

People kept animals, They were self-sufficient (autosuficiente). People sold mangos and avocados in the street at the traffic lights. Coffee was a big business, but the nice coffee is exported.

Drugs were not approved of. You couldn’t even buy cigarette papers.

Mel didn’t know any Spanish. She used to smile a lot. She paid a Spanish teacher for lessons. She went to a bar to practice onece a week.

In Nicaragua they speak Spanish very slowly and clearly.

Galicia has its own language. Some South American countries call all Spanish people Gallegos.

What makes you happy?

What one thing, if you were to tell someone about yourself, would they find it difficult to believe? 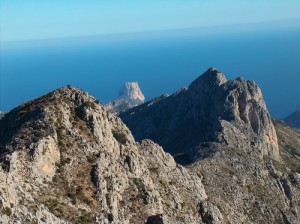 Mel: She’s climbed and travelled a lot. She took Reza and Craig to climb the Sierra de Bernia. It was easy for Mel, but Reza and Craig found it a difficult climb.

If you could change something about your character, what would you change?

Mel: I’d be less irritable and impatient. She’s like to be more chilled and relaxed. Mel learned how to meditate in Australia. She has a siesta each day and does breathing exercises. She doesn’t sleep deeply.

Reza sits down sometimes and thinks about anything that comes into his mind. He’s not really into Buddhism. He thinks that the self is very important.

Vicoria never has a siesta. She wakes up drowsy (somnoliento, adormilado) and feels bad. She’s quite anxious and nervous.
Send us an email, or a sound file (mensaje de voz en mp3) with a comment or question to craig@inglespodcast.com or belfastreza@gmail.com.