Scuffle, belongings, eyeball and cold-blooded are words invented by William Shakespeare. We’re going to explain these words, and more, in this vocabulary episode of Aprender Inglés con Reza y Craig

We spoke about old English in episode http://www.inglespodcast.com/167

Shakespeare is rightly credited with adding many new words to the English language. However, he is sometimes mistakenly credited for some words that he actually wasn’t the first to use, but certainly made them more popular.
Some words may well have already been (widely) used in spoken English, but Shakespeare’s works is where they were first recorded in writing. He also created new word forms by adding prefixes, suffixes, etc. For instance, creating a noun by adding a suffix to a verb. Eg. assassinate – assassination 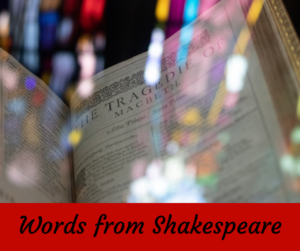 Addiction (from Othello) – to be addicted to something

Assassination (from Macbeth) – to assassinate someone. What’s the difference between assassination and murder? Actually, the verb “to assassinate” was used before Shakespeare, though perhaps he made it more popular.

Belongings (from Measure for Measure) Have you got all of your belongings?

Eventful (from As You Like It). Have you had an eventful week so far?

Eyeball (from The Tempest). It can also be used as a verb these days. Are you eyeballing me?

Fashionable (from Troilus and Cressida)

Manager (from A Midsummer Night’s Dream)
“Where is our usual manager of mirth? What revels are in hand? Is there no play to ease the anguish of a torturing hour?”

Scuffle (riña, altercado) (from Antony and Cleopatra). Verb and noun. There was a scuffle in the car park after the club closed.

Elbow (from King Lear). The noun already existed. He invented the verb (to elbow someone – darle un codazo a)

Zany (from Love’s Labour Lost) He was clowning around like a zany fool.

But not all Shakespeare’s new words became popular. Some are very obscure and sound funny. For example:
Slug-a-bed (from Romeo and Juliet) Someone who sleeps in
Kicky-wicky (from All’s Well That Ends Well) = housewife
Congree (from Henry V) = to agree. This probably disappeared precisely because English already had a very similar word that means exactly the same!

…and now it’s your turn to practise your English. Do you know if any famous Spanish writers have introduced words into the Spanish language?
Send us a voice message. https://www.speakpipe.com/inglespodcast
Send us an email with a comment or question to craig@inglespodcast.com or belfastreza@gmail.com.

Thank you to all our wonderful Patrons who are supporting the podcast (names on the website)
Special thanks to.Bruno our Gold Sponsor who offers walking tours of Copenhagen through his company https://www.copenhagenwalkingtour.com/
Castle Tours and Walking Tours of Copenhagen both in English or Spanish!
Also, Favela walking tour in Rio, led by local guides only. It’s safe and it helps the community to improve their daily needs. Go to Bruno’s websites to find out more information: http://www.favelawalkingtour.com.br/

On next week’s episode: The difference between even though and even if

The music in this podcast is by Pitx. The track is called ‘See You Later’
Photo by Matt Riches on Unsplash