What do you know about Canada? In this episode we’re going to put Canada under the microscope and look at some interesting facts and famous people that come from the second largest country on the planet. Welcome to Aprender Inglés con Reza y Craig.

Subscribe on iTunes, find us on Spotify, IOS, inglespodcast.com, Also on the new Google podcasts app!

Interesting facts
2nd largest country on the world (after Russia). It has the longest coastline in the world. 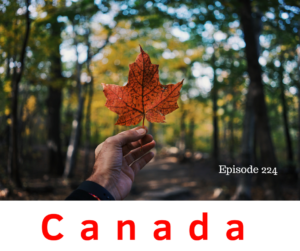 Canada has 6 time zones and two official languages (French and English)
The capital is Ottawa and has about one million inhabitants.
Canada sells milk in bags.
Lowest recorded temperature was -63C in 1947.
Has more lakes than the rest of the world’s lakes combined.
Canada has the longest street in the world. Yonge Street in Ontario starts at Lake Ontario, and runs through Ontario to the Minnesota border, a distance of almost 2,000 km.
Eats more macaroni and cheese than any other country.
People who live in Churchill, Canada, leave their cars unlocked in case residents need to escape from Polar Bears.
Prostitution is legal, buying the services of a prostitute is not.
Maternity Leave is a year in Canada.
Canada has provinces and territories – not states.
The Hotel de Glace in Quebec is made of ice. It’s built every year using 400 tons of ice and 12,000 tons of snow. Every summer it melts away and it’s rebuilt the following winter.
The Mounted Police was formed in 1873, with nine officers. In 1920, the group merged with the Dominion Police to become the famous Royal Canadian Mounted Police, which today has close to 30,000 members.
Canada got its name because of a misunderstanding. When Jaques Cartier, a French explorer, came to the new world, he met with local Natives who invited them to their ‘kanata’ (the word for ‘village’). They thought the name of the country was “Kanata” or Canada.
The Head of State of Canada is the monarch of the UK – HM Queen Elizabeth II, Queen of Canada!
There is 3 times more violent crime per 100 residents in the USA than in Canada.
Canada has won the Ice Hockey World Championships 26 times – only narrowly surpassed by Russia.

Discussion
When you think of Canada what comes to mind?
Can you tell the difference between a Canadian and an American accent?
Could you live in a country which is so cold in winter?
Do you think Quebec should become independent from the rest of Canada?

…and now it’s your turn to practise your English. Have you been to Canada? Would you like to go? Do you have any comments about Canada? We’d love to hear your thoughts.
Send us a voice message. https://www.speakpipe.com/inglespodcast
Send us an email with a comment or question to craig@inglespodcast.com or belfastreza@gmail.com.

Thank you to…..Bruno our Gold Sponsor on Patreon
Walking tours of Copenhagen through his company https://www.copenhagenwalkingtour.com/
Castle Tours and Walking Tours of Copenhagen both in English or Spanish!
Also, Favela walking tour in Rio, led by local guides only. It’s safe and it helps the community to improve on their daily needs. Go to Bruno’s websites to find out more information: http://www.favelawalkingtour.com.br/

Thank you to Patricia Alonso who continues working hard to transcribe episodes for you. We now have available episodes 1 to 22 and 131 to 142. Not only Patricia, but others in the past who have helped us like Arminda from Madrid, Alberto from Granada – thank you.

On next week’s episode: forests

The music in this podcast is by Pitx. The track is called ‘See You Later’
Photo by Guillaume Jaillet on Unsplash