Life isn’t always a bowl of cherries! Disasters happen in the world, and today we’re going to help you talk about them in English in this episode.

An email from Veronica from Mexico
This is Veronica Morfin. It is nice to get to listen (to) your podcast. I don’t dare to record a voice message now, but eventually I’ll do it.
Anyway, One week ago, I came across your podcast when I was desperately looking for something to help me to improve my listening skills. I did the CAE exam and I failed the listening section.
So, here I am happily listening (to) your humorous way. That’s fantastic.
Please, say hi to Reza and to all your podcast listeners from Mexico.

Voice message from Veronica from Mazatlan, Mexico – She’d dared to do it and she sounds great!
No microphone necessary – download the app to your phone or go to the website: https://www.speakpipe.com/inglespodcast

This website has practice tests to help you prepare for the CAE listening at home: https://www.examenglish.com/cambridge_esol.php
This website practises other parts of the exam, but not the listening: http://www.flo-joe.com/
Good luck with the exam. We look forward to listening to your voice message! 🙂
Recommended website for FCE and CAE: https://virtuaule.com/

We spoke about the weather in http://www.inglespodcast.com/99

Earlier this year Mexico suffered an earthquake centred around the states of Puebla and Morelos. 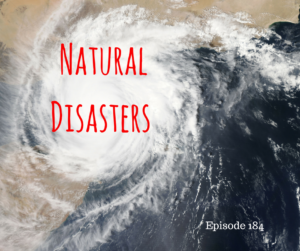 More than 40 buildings collapsed (many in Mexico City) and 370 people lost their lives (Wikipedia). Mexico is very seismically active.
Around 10,000 died in 1985. ‘The moles’ volunteers were formed (los topos).

Earthquake – tremor (vibration) – seismic activity – fault lines – Richter scale (to measure earthquakes on a scale of 1 – 10)
Tsunami
Tidal wave
Volcano – to erupt – magma (molten rock in the earth’s crust) – lava (molten rock) – flow
Tornado (violent windstorm over land – twister) – – whirlwind (a column of air whirling around itself)
Hurricane, cyclone and typhoon are the same (usually with heavy rains and winds) – hurricane’s mainly occur in the Atlantic and Northeast Pacific.
Typhoon is used in the South Pacific and Indian Ocean.
Cyclone is used to describe both. In the Southern Hemisphere, The motion of the wind in a cyclone is clockwise; in the Northern Hemisphere it is counter/anti-clockwise.
Avalanche – snow storms – blizzard
heat wave – drought
forest fire – bush fire (bush – arbusto) – wildfire
Flood/Flooding – flash flood – monsoon
Landslide
Gale – gale-force winds – the beaufort scale (measures wind force from 0-12) – gust of wind – dust storm, sand storm
Blackout – power cut: not a natural disaster, but often caused by natural disasters
Solar flares every couple of hundred years. Last one burned out telegrams!
“Massive solar flares are sometimes accompanied by ‘coronal mass ejections’ (CMEs) which can trigger geomagnetic storms that have been known to disable satellites and knock out terrestrial electric power grids for extended periods of time.” – Wikipedia
Meteorite impact/strike

…and now it’s your turn to practise your English. Do you have any comments or questions about this episode? Or maybe an idea for a future episode?
Send us a voice message and tell us what you think. https://www.speakpipe.com/inglespodcast

– How to Pass a Job Interview mp3 and pdf

Many thanks to Patricia from Madrid who has translated episode 8 and 9. Thanks also to Arminda from Madrid, Alberto from Granada and Angélica Bello from Madrid, we now have full transcriptions for episodes 131 to 142, and episodes 1 to 10.

On next week’s episode: Supermarket Vocabulary

Photo by NASA on Unsplash