On today’s podcast you’ll learn more linking words ‘so as to’ take your English to the next level.

Voice message from Gabby from Peru who appeared in a play and went outside her comfort zone.
say ‘last night’ not X‘‘X
say ‘at night’ not X‘X

Voice message from Francisco from Úbeda who has some very good news!
Francisco is now a C1 guy!
‘Another string to my bow’
‘I’m psyching myself to become more employable’ (to ‘psych yourself up’ to be mentally ready and confident to do something)
I did it from scratch – empezar desde cero (scratch – rasguño, raya) – from a line on the ground at the start of a race.
‘That’s the drawback of becoming an AIRCoholic’ (drawback – desventaja, inconveniente)

Voice message from Marcos Forgiarini from Argentina with comments about the British Music Legends http://www.inglespodcast.com/175 – Immigrant Song by Led Zeppelin
X‘I like very much’X – I like IT very much.
He’s been listening to some Celtic Punk bands (like The Rumjacks (Australian) and Dropkick Murphys (American) – mix of punk rock and celtic folk) The Pogues 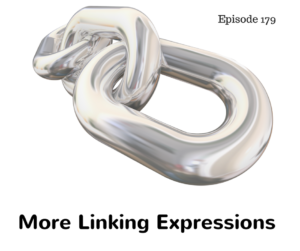 We spoke about some linking expressions in http://www.inglespodcast.com/55 (but, even though/although, however, in spite of/despite, on the one hand…., but on the other hand

As long as / so long as (siempre y cuando, mientras que) – As long as/So long as you’re over 18, you can buy alcoholic drinks.

What is the difference between “as long as” and “as well as”?
As long as = siempre y cuando – “I am happy, as long as the sun is shining.”
As well as = además de – “Our neighbour brought cake as well as juice for everyone.” / El vecino trajo tortas, además de jugo para todos.

“We should pack a raincoat in our suitcase for a holiday to Ireland – it might rain there!”

So as to (in order to – para, con el objetivo de) – Reza left early so as/in order not to be late.

I tested the microphone before Reza arrived so as/in order to save time during the recording.
(The two clauses imply the same subject with infinitive ´to´)

Owing to (due to / because of – debido a ) – Today’s lesson has been cancelled owing to/because of/due to lack of interest. The flight was cancelled due to/because of/owing to the bad weather.

On next week’s episode: Word stress