Who are your favourite British music artists? We’ll tell you ours and explain the difference between upside down, inside out and back to front in this episode of…..Aprender Inglés con Reza y Craig.

Hi to Melina and congratulations on getting a new (and better) job!

Audio feedback on episode 165 about chemistry from Maria and Alex

Feedback from Maite from Xátiva about the upside down King Felipe V.
First of all, I’d like to thank you for everything you do. I really enjoy listening to your superb podcasts.
Secondly, just as you asked for, here is my little research about the upside down King Felipe V.
Apparently, it was a Francesc Gil’s idea, canon of the Seu of València in the 50’s, who suggested Museu de l’Almoradí’s manager to hang the painting upside down as a symbolic meaning of punishment.
Felipe V ordered (his men) to burn Xàtiva twice and he also exchanged its name for San Felipe.
Don`t you think that this is more than enough probable cause?

Upside down
Inside out
Back to front

Voice message from Paco from Badajoz
It’s time to ‘renew our commitment to the English language with energy and enthusiasm’!
We should monetize the podcast – we are!
This podcast will always be free.
Teacher Luke XX address/URL (Uniform Resource Locator) https://teacherluke.co.uk/
A Cup of English: http://www.acupofenglish.com/

Email from Francisco, from Úbeda.
Hi friends, how are you doing?

Just to say the episode about music was brilliant (episode 163). I empathize with Reza because I played the guitar in a heavy metal band when I was younger.
I had to leave because of my degree and it was a difficult decision, but the right one.
Nowadays I still play my Gibson at home, remembering the real buzz you feel when you pull the strings on the stage.

By the way, have you ever made any episode about the British rock legends? Would you consider it? The Beatles, Pink floyd, The Who, Deep Purple, Led Zep, Black Sabbath, Iron Maiden…..and so on.
I’m deeply in love with British music, in my opinion it’s the best item of your culture (the best thing about your culture).

Thanks a million for everything, cheers from Úbeda! 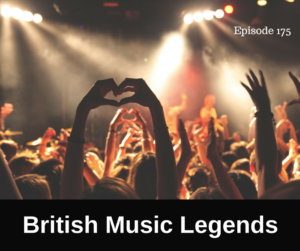 Ground-breaking (to break ground – abrir camino, ser pionero)
To innovate – innovar – innovation, innovative
Influential – influyente – to have influence
To lead the way
Cutting edge (edge can be ‘borde’ – the edge of the table – or ‘ventaja’ – tall basketball players have an edge.
Trailblazing
Trendsetting – creating a fashion
A “wannabe” – someone who wants to be famous
Up and coming – just starting to achieve recognition
At the peak of your career
Past your best – no longer at your peak (too old to Rock ‘n’ Roll, too young to die!)
An unsung hero – Somebody who should be known for their achievements but isn’t.

How do very good musicians achieve the status of legend? How do they stand out?
Do all rock and pop stars deserve (= merecer) their fame?

…and now it’s your turn to practise your English. Who are your British music legends? Who are your favourite bands and musicians?
Send us a voice message and tell us what you think. https://www.speakpipe.com/inglespodcast

On next week’s episode: Camping