Do you mix up your protons, neutrons and electrons? I do. But no more! We’re going very far outside our comfort zones with chemistry vocabulary on this episode of…..Aprender Inglés with Reza and Craig.

Email from Yolanda asking about the Aptis exam:
I read something about the Aptis exam, which I think is a British Council’s Certificate (or it’s offered by BC, I don’t know).
So, do you recommend people to do it? Is its value the same that Cambridge Certificates?
I was said (told) it is easier than EOI.
I’d like to know how long time it is valid (….how long it’s valid for), it’s cheaper than Cambridge Certificate, isn’t it?

Yes, Aptis is a British Council exam.
It’s more for companies and organisations. Imagine if you want to test the English level in a call centre, for example. It’s customizable – logo and parts of the test. It has high accessibility.
It’s mapped to the CEFR.
It costs 70 euros, so it’s cheaper than Cambridge exams.
Does it have the same value than (as) the Cambridge certificates?
It isn’t recognised as widely as a Cambridge exam around the world.
How long is it valid for?
The Cambridge exam doesn’t have an expiry date.
Is it easier than the EOI? It’s a test, like IELTS or TOEFL, not an exam. So it isn’t designed for any specific level. Your results will tell you your level.

Voice message from Maria and Alex

Chemistry vocabulary
Maria – I’m (a) chemistry teacher – use ‘a’ or ‘an’ with professions in the singular
Alex – different aspects of (XtheX) life – no article when you talk about life in general. 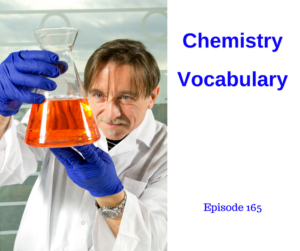 The article Episode 41 with Bea

Chemistry Vocabulary – Pronunciation of ‘chemistry’ /kemistry/ – chemist, pharmacy, drug store (US) In the UK, the pharmacy is often inside the chemist’s (the person is the chemist or pharmacist).

Absolute zero – The lowest temperature theoretically possible, when the movement of particles would be minimal. It is zero on the Kelvin scale, equivalent to -273.15°C.

Heat of Vaporization – Amount of energy required for a liquid to become a gas.
Khan Academy Chemistry

Nucleus – The center of an atom.

Protons – Particles in an atom with a positive charge.

Neutrons – Particles in an atom with no charge.

Electrons – Particles in an atom with a negative charge.

Atomic number – The number of protons in the nucleus of an atom, which is characteristic of a chemical element and determines its place in the periodic table.

The Periodic Table of the Elements (from Wikipedia)
The periodic table is a tabular arrangement of the chemical elements, ordered by their atomic number (number of protons), electron configurations, and recurring chemical properties.
This ordering shows periodic trends, such as elements with similar behaviour in the same column.
It also shows four rectangular blocks with some approximately similar chemical properties.
In general, within one row (period) the elements are metals on the left, and non-metals on the right.

The rows of the table are called periods; the columns are called groups.
Six groups have names as well as numbers: for example, group 17 elements are the halogens; and group 18, the noble gases.
The periodic table can be used to derive relationships between the properties of the elements, and predict the properties of new elements yet to be discovered or synthesized.
The periodic table provides a useful framework for analyzing chemical behaviour, and is widely used in chemistry and other sciences.

How many elements are there in the periodic table? – As of 2016, the periodic table has 118 confirmed elements, from element 1 (hydrogen) to 118 (oganesson). Elements 113, 115, 117 and 118 were officially confirmed by the International Union of Pure and Applied Chemistry (IUPAC) in December 2015.

to be in your element

chemical attraction – there’s chemistry between us

For every action there is an equal and opposite reaction

Hello to Judith from Central America who is a new listener to the podcast. Here’s Judith’s voice message
‘So helpful for improve my English’ (improving)
Job interviews in English – Episode 13

On next week’s episode: The Cambridge CAE Exam