On this podcast, you’ll improve your music vocabulary and learn a few music expressions and idioms that will take your English to the next level.

Welcome to Aprender Inglés with Reza and Craig.

We spoke about music vocabulary back in episode 27

songwriter, singer-songwriter = someone who composes and sings their own songs – cantautor

instrumentalist = someone who plays a musical instrument

“roadie” = person who helps transport the group/equipment on tour

producer = person in charge of the technical side

manager = person in charge of the business/logistical side

“groupie” = a (young) impressionable fan who follows a group and would do anything to be with the group members, including maybe sleep with them! 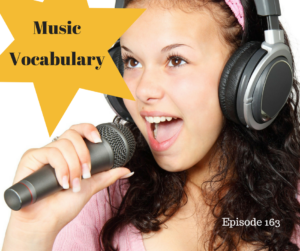 rhythm – not to be confused with “rhyme”

to play in a band

concert/gig; to do a gig = to give a concert

the acoustics = the particular sound qualities of a venue

eg. I love the acoustics in this church; the sound echos a little.

a cover version/to cover (a song) = not an original song, a version of another’s song

to release a record/song/CD, etc. = to make it available to the public

face the music – to be punished; to finally confront a difficult situation

to jazz something up – make it more interesting

to play second fiddle – to always be the second, but not first focus of attention (fiddle=violin)
(eg. I’m tired of my boss getting all the credit for our teamwork. I’m always playing second fiddle.)

to call the tune(s) – to decide what happens

to strike/hit the right note – to do/say something appropriate

to ring a bell – to sound familiar (eg. I think I recognise that voice. It rings a bell.)

to change your tune – to change your perspective/opinion/attitude/version (eg. Peter used to say he hated London and now he loves it. He’s changed his tune.)

to play by (it) by ear – to act without a plan, depending on the circumstances that arise (In music it means to play without a score.)

as clean as a whistle – very clean (whistle = pito)

to blow the whistle, to be a whistleblower – to publicly denounce wrongdoing (eg. Baltasar the judge blew the whistle on his corrupt colleagues and got into trouble for it.)

What groups/singers/types of music do you like or dislike?

Do you prefer songs or instrumental music?

When and where do you like listening to music?

Does music relax you, perk you up, excite you, bore you, make you laugh, make you cry…?

Can you play an instrument or sing? What instrument would you like to be able to play?

Have you ever played in a group?

What’s the best concert you’ve been to?

Shakespeare wrote: “If music be the food of love, play on…” What do you think?
…and now it’s your turn to practise your English. Do you have a question for us or an idea for a future episode?
Send us a voice message and tell us what you think. https://www.speakpipe.com/inglespodcast

We want to thank Arminda from Madrid and Alberto from Granada and Angélica Bello from Madrid for continuing to transcribe full transcriptions.
We now have full transcriptions for episodes 131 to 142. And thanks to Angélica who has joined our superhuman transcribing team! She’s done episode 1 (‘do’ and ‘make’ You make a mess. Haces un lío. Present simple, the schwa, phrasal verb was ‘take up’ and ‘collocate with Craig’!

On next week’s episode: A Touring Holiday in the UK