Studying for the FCE Exam and Climate Change Vocabulary – AIRC160

Are you studying for the Cambridge FCE exam? Need some help? We’ll be talking about that and climate change vocabulary on this week’s episode of……Aprender Inglés con Reza y Craig

XX – We’ve been living in Yorkshire for a year. We came to Yorkshire a year ago.

Email from Alberto Diaz
Hello Craig and also Reza “The dynamic duo” hahaha
Please help me, I have a doubt
How we can realize what “time” has the verb could in the next sentence? (How can we know which tense the verb ‘could’ is in the next sentence?):
“I could go to the party.”
Past: Pude/Podía ir a la fiesta
Subjuntivo: Podría ir a la fiesta.
How (does) a native speaker figure out the exact tense (past or subjunctive)?
Thanks in advance, Alberto.

If I could (PAST-pudiera) run faster, maybe I could (CONDITIONAL-podría) be a famous athlete some day. 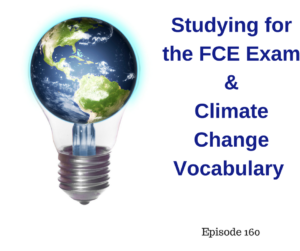 As a result of….
Has an impact on…
Is a consequence of…
A rise in temperature could lead to…..
There’s a high risk of…
Long-term consequences

Voice message from Mamen (Thank you for the cheese!)

Cambridge exams information: http://www.cambridgeenglish.org/exams/first/ – You can change the language to Spanish at the top right hand side of the page (on a desktop)

On next week’s episode: Personal Space