English Expressions from The Sea – AIRC150

Today you’ll learn some English expressions about the sea.

First we havea an email from Becky
Hello guys!
Congrats for your podcasts, very useful!!  I’m going straight to the point.
I’m really very confused with the use of the apostrophe in this case:
80s – 80’s – ’80s – 80s’
I wanna get a tattoo with the following sentence: – 80s girl at heart- (meaning I’m a big fan of the eighties music, culture, fashion..everything, or that I should have be born in the eighties, feeling of belonging to another decade.
And I wanna make sure I dont get it in the wrong way ’cause it’ll stay forever on my skin.  Could you please help me out here?
Thanks a lot!!
Becky

Voice message from Juan from Jaen (the World Capital of Olive Oil – known by locals as ‘liquid gold’.)

Comment on the blog from Roberto about episode 141 when we spoke about “Go to hell!” / “Get lost!” / “Get out of here!” – ¡Vete al carajo!
“From my point of view, the real meaning of the expression “Vete al carajo” comes from the navy, where “carajo” is that small basket at the top of a main mast. I think, “Crow’s nest” is a suitable word for that place in English. Just to add another meaning of the Spanish word “carajo”.
Not a good place to be for sure!
Cheers, Roberto”

I think they used to send out crows to find land. (crow – cuervo)

Thanks also to Marcelo Fernandez who sent an explanation and a picture of a crow’s nest on a ship. 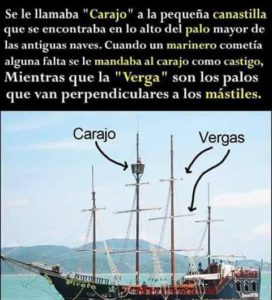 Rock the boat – to do or say something that will upset people or cause trouble. Don’t rock the boat / Don’t make waves.

Like ships that pass in the night – people who meet for a brief but intense moment and then part, never to see each other again. Has that ever happened to you?

That ship has sailed – an opportunity that has passed or a situation that can no longer be changed. – You’ve missed the boat.

“Three sheets to the wind” – someone who has had too much to drink. It comes from a term that originally described a ship in a complete mess, with its sails flapping and moving around in the wind.

“Taking the wind out of someone’s sails” means beating them in an argument, or making them feel less confident in their actions.
Originally, the term referred to a naval maneuver. One ship would pass close to its opponent and block its access to the wind. – very useful tactic in battle.

Between the devil and the deep blue sea (between a rock and a hard place) – entre la espada y la pared – When you face a dilemma. – Going to the dentist – if you go you suffer, and if you don’t go you suffer!

Knowing the ropes – someone is competent at what they do. The statement, printed on a seaman’s discharge, indicated that he knew the main uses of the ropes on a ship. Yet rather than indicating that the sailor was a master, the phrase meant that he was a novice who only knew the basics of sailing.

Video feedback from Andres, Aarón and Mikel from Costa Rica – Love the pineapples in the background!

Conscious suggests being generally aware of the world around you.
Aware is more specific, you are aware of certain situations or facts. – Are you aware how important this podcast is?

Consciousness comes from one or some of the five senses. It’s a state (subconscious, unconscious – not awake, passed out – desmayado/a, inconsciente)
Awareness has more to do with the mind (self-awareness) – it’s the knowledge that something exists somewhere:

Send us an email with a comment or question to craig@inglespodcast.com or belfastreza@gmail.com. Or send us a video or voice message like Mikel, Aaron and Andres from Costa Rica

On next week’s episode: Words in the News