The difference between fake, forge, falsify and counterfeit – AIRC147

Today on Aprender con Reza y Craig we explain the difference between fake, forge, falsify and counterfeit, and answer more of your questions.

Voice message from Gabriel from Tijuana
To put something into practice – to do it!
Gabriel wants to be AN ACCOUNTANT. We spoke about the economy and trends in episode 117  and money vocabulary in episode 23, episode 24 and episode 46 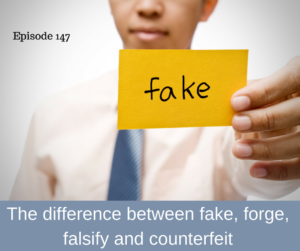 To subscribe to our free monthly newsletter, go to http://cuadernodeingles.com/
For free courses, listenings, exercises and other great stuff to improve your English go to http://www.mansioningles.com/

Counterfeit – falso – “They check 50 euro notes to see if they are counterfeit.”

What’s the difference between ‘fake’ and counterfeit?
All counterfeits are fakes, but not all fakes are counterfeits.
‘counterfeit’ implies deception, but ‘fake’ just means it’s not the real thing.

Counterfeit money is fake money which is also intended to look so much like the real thing, that people can actually use it to buy things.

It’s also possible to have fake money that is not counterfeit. Have you ever played the game Monopoly? Which word would you use to describe Monopoly money?

Monopoly money is fake money, but it is not intended to be used as legal currency.

If you found some counterfeit money, would you try to spend it?

Reza was once given 3 counterfeit 20 euro notes from a bank’s cashpoint machine.

Forge is a verb – to fake, to falsify. To forge someone’s signature. Is your signature easy to forge?

Forge also means to shape, create. To form by heating and hammering (forjar). To forge metal, to forge a bond or friendship with someone.

A forgery (noun) falsificación “The artist was found guilty of forgery.” “This check is a forgery. You can’t use it.”

Falsify is falsificar – “The witness falsified his statement in court.” You can falsify a document. Have you ever falsified anything? – on your CV perhaps?

King James bible – Psalm 115 (salmo):
“They have mouths, but they speak not: eyes have they, but they see not.

They have ears, but they hear not: noses have they, but they smell not.”

Speaking about idols (los idolos) “Their idols are silver and gold, the work of men’s hands.”
It’s interesting that the grammar is very different from grammar that we teach in the classroom and in books.

A voice message from Javier from Tolosa:

Why ‘the news IS read by….’ and not ‘XX read by…’?
Improve your listening – put your GPS in English.

This is an example of someone who is doing everything right: voice mails, videos, podcasts, TV series, taking advantage of everything in order to improve his English.

PUDDING: Yes, we use pudding as a synonym for dessert. “Would you like pudding after your meal?” Pudding can also be a specific type of dessert; chocolate pudding, sticky toffee pudding, rice pudding and, of course, the savoury Yorkshire pudding that we eat with roast dinners.