In this episode we’re going to help you understand and use vague language. What are you doing later this evening? – I’ve got to sort out some stuff at home. (What stuff?)

EVEN THOUGH = aunque, a pesar de que – “I decided to walk to the library even though it was raining.” / “Decidí caminar hasta la biblioteca aunque estaba lloviendo.”

EVEN SO = aun así – “I know you don’t like vegetables, darling. Even so, you must eat them.” / “Ya sé que no te gustan las verduras cariño. Pero aun así te las tienes que comer.” 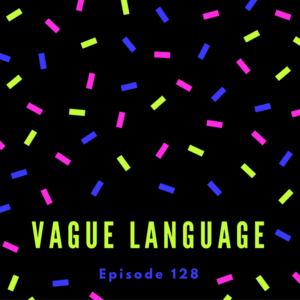 Sometimes vague language is bad:
How much does this cost? – Around 15 quid, more or less.
Legal contracts and documents, for example, shouldn’t be vague.
When we speak though, we often use vague language.

What did you do yesterday morning?

I took the number 19 bus into the centre of Valencia and bought a pair of blue shoes and a beige pair of shorts in El Corte Inglés. Then I met Michelle for coffee in Starbucks at 12.30. (too much boring detail!)

I went into town to get a few things and then I met a friend for coffee. (more natural)

Vague language
STUFF – There’s so much stuff in my bag. / Clean all that stuff off the floor. (stuff is uncountable: “A lot of stuff” / “Lots of stuff.” / “Much stuff” / “Loads of stuff.”
What’s that stuff you use to make your hair soft?
THINGS – Pass me that thing/thingy on the table. / Don’t forget to take all those things with you when you go.

Are you going to that thing this weekend?
Have you got a lot of stuff to do tonight? (I’ve got a few bits and bobs/bits and pieces/odds and sods to do)

Vague language to make a list shorter
…..and that kind/sort of thing
….and so on
…..etcetera (etc)
….and things like that
….or something
….or something like that

What do you like to do at weekends? – Sleep in ‘till late. go to the beach, meet up with friends, listen to podcasts, read, drink beer and watch TV series. – You know, sleep in drink beer with friends, that kind of thing. (Don’t give EVERY DETAIL)

What kind of food do you eat when you’re home in Belfast?
Meat, potatoes, stew and things like that.

He’s got a flash new sports car; a Jaguar or BMW or something.

Vague language when you’ve forgotten a name or a word. 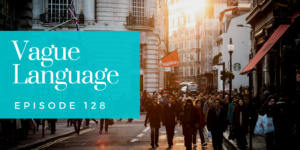 Thingy – Pass me that thingy on the table.
Whatsit / What’s it called – Where’s the whatsit that you change channels with?
You’d better tell whatsit – what’s his name – the guy in charge of the conference.
Thingamajig – Take out the plastic thingamajig and then put the batteries in.
What’s it called? / What do you call it? – I need to open this bottle of wine, but I haven’t got a ….what’s is called?…the thing you open bottles with…….ahh! a corkscrew!
Whatshisname / whatshername / whatshisface / whatsherface (What is her face?) – I got an email from er…whatshisname? Er..y’know, that bloke from Madrid this morning. (not used in written English and NOT used in person to someone’s face! XX

On next week’s episode: Time clauses (a question from Ivan from Valencia)