Too, Enough and Religion Vocabulary – AIRC122

If you are a new listener to this award-winning podcast, welcome!

With over 40 years of teaching between us, we’ll help you improve your English and take it to the next level.

In this episode we look at the difference between too and enough and vocabulary connected to religion.

Listener Feedback: Wesling Rojas
“I want to improve my speaking but I don’t know how to do it. Please just give me some advices (advice/pieces of advice/some advice).”

1. Go to an English-speaking country.

3. Go to a language exchange (un intercambio) in a bar or cafe.

5. Find a foreign boyfriend or girlfriend

6. Arrange to meet up with work colleagues or friends and speak English together for an hour a week.

7. Speak English at home to your family and friends.

8. Record yourself speaking English on your mobile phone and play it back.

too – demasiado
enough – no bastante
Reza’s TOO poor to buy designer clothes.

Designer clothes are TOO EXPENSIVE. (TOO + ADJECTIVE)

TOO goes before an adjective or an adverb. ‘It’s too expensive’ / ‘She speaks too quickly.’
ENOUGH goes before the noun. – ‘I don’t have enough money.’

ENOUGH goes after adjectives – ‘Are you warm enough?’ / ‘Is your coffee strong enough?’

ENOUGH often goes with the negative NOT. ‘I’m NOT warm ENOUGH.’

You can use ENOUGH AFTER a verb – ‘Podcasters do NOT get paid ENOUGH money.’ / ‘You’re NOT studying ENOUGH.’ 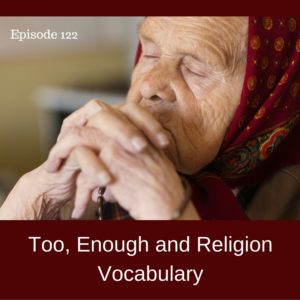 Religious (noun) – a religious person
Christian religion – Catholics and Protestants
Greek Orthodox
Jews follow the Jewish religion called Judaism.
Muslims (Moslem) follow the Islamic religion called Islam.
If you are a religious person, you have faith.
to pray – rezar
Hindus pray in a temple
Jews pray in a temple (US) / Synagogue (UK)
Hindus follow hinduism
Buddhists follow Buddhism
Agnostic – Does not know if there is a God or not.
Atheist – Does not believe in God.
Christians pray in a church
Muslims pray in a mosque
Buddhists pray in a temple
Sikhs wear a turban on their heads
A catholic priest (priest – cura, sacerdote
vicar (in the Anglican church) – pastor, vicario
monk – monje – monks live in a monastery
nun – monja – nuns live in a convent
to take a vow of silence – voto de silencio
holy – santo
the symbol of Christianity is the cross
…and now it’s your turn to practise your English. Do you have a question for us or an idea for a future episode?
Send us a voice message and tell us what you think. https://www.speakpipe.com/inglespodcast

On next week’s episode: The difference between ALL and EVERYTHING | FIX, MANAGE, MAKE IT and FIGURE OUT