The Economy and Discussing Trends – AIRC117 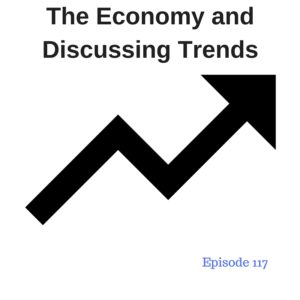 We spoke about money vocabulary and the economy in Episode 46

UP AND DOWN OR STABLE

to fluctuate/ a fluctuation
to level off or out/a level(l)ing off or out
to hold steady
to flatline/flatlining
to even out/an evening out (but *NOT with your friends in this case!)
Adjective + Noun phrases / Verb + Adverb phrases

There has been a steady rise in the number of unemployed people in recent years.
The figures show a sharp decline in the number of homeowners this year.
Compared to last year’s figures, this year has seen a significant increase of 40% so far.
We can see a slight drop of 2% compared to last week, according to theses statistics
The figures show (that) the number of homeowners has declined sharply this year.
The chart shows how car sales have plummeted since the crisis by 67%.
The table shows (that) the amount has flatlined at 8 million tonnes.
As the graph demonstrates, a dramatic price increase/increase in price occurred last month.
In recent years the percentage of homeless people in Spain has risen sharply.
There has been a slight improvement in our team’s ball possession this season.
As you can see from the diagram, the ratio of men to women is currently 2:1 (two to one).
Sales rose by 10% from 32,000 to 32,320. This meant an increase of 320.
The present fluctuation in prices makes future predictions difficult.
The amount of plastic polluting the seas looks set to continue rising, according to the figures.
Half of all those interviewed said they had bought 2 or more handheld devices over the last 5 years.

Improve your speaking with an italki teacher
…and now it’s your turn to practise your English. Do you have a question for us or an idea for a future episode?
Send us a voice message and tell us what you think. www.speakpipe.com/inglespodcast

On next week’s episode: Drugs and Addiction