Here’s a wonderful interview with David Garcia Palencia who is an English teacher in Murcia, Spain and webmaster of the site Dawayingles.com.

David speaks about how he got his English to an amazingly high level, and he also gives some wonderful advice on how you can also take your English to the next level.

I asked him about studying for the Cambridge exams and he explains why he started his excellent website dawayingles and his podcast. So lets get straight to it. Here’s David Palencia Garcia from dawayingles.com

When and why did you start dawayingles?

David created dawayingles.com in March 2014. He first started thinking about it in December 2013. 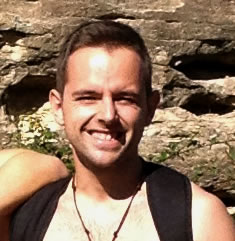 He started the site to help his students and give them material and support online.

There is a lot of great material for learning English at Dawayingles.com

Where does the name ‘daway’ come from?

The name DAWAY is a combination of DAVID and WAY DA(vid)WAY, or David’s way. It’s also a play on the expression “This is ‘daway’ (the way).

David teaches at Londinium, a private academy in Murcia, Spain.

David studied philology at the Unviversity of Murcia in 2008. He went on to do an Erasmus program in Chester in the UK for a year.

Were there other Spanish speakers with you?

He did speak Spanish with a couple of friends when he was there, but he also worked hard and improved his English a lot. He says “Keep away from other Spaniards if you go abroad to study!”
(“Flee from the Spanish!” to flee = huir)

He did his best to mix and hang out with English speakers while he was in the UK.

It was hard for David to make friends, He says (and I agree) that English people can be a bit cold and difficult to get to know.

He did make a good friend from Scotland.

He went out a lot with international students (French, Italians etc). He had two flatmates. One of them was called Shelly. His Canadian friend Shelly helped him a lot while he was in the UK.

What advice would you give to a student who says that they don’t have time to study?

Try not to think of English only as an academic subject. A language is alive. Don’t just close the book after the lesson and forget about English.

Get free audio on your smart phone, your computer or any MP3 device.

Use ‘dead time’ when you’re waiting, queueing in the supermarket, waiting for the bus etc.

David says on his blog dawayingles.com:

YOU (the student) have to sweat and do the work. No one can do it for you.

You have to be realistic. Learning a language is not something you can do just by going to class. You have to work!

Forget about the books, forget about taking notes and studying grammar. Find websites and podcasts about your interests. Play online games with native speakers.
Engage with the language and with the culture.

If you were to pass on one golden tip about how to learn English, what would you suggest?

Try to make some friends. Forget about studyng and get in touch with the culture.

It’s easy to get fed up (harto) with studying and fill-in-the-gap exercises. Meet native speakers and get involved with the language. Try to make friends online and in your area.

Did you find any English speakers in Murcia when you were studying there?

David met Adam at university and they became friends. Because of Adam, David met more native people who also became his friends.

You can also join ‘tandems’ or ‘intercambios’ in your area. Be active and find groups where you can practice. Go to a pub where native speakers are, have a beer and join in the conversation.

David also spoke English with some of his SPANISH friends at university!

What advice do you have for students who are preparing Cambridge exams at home (FCE, CAE etc)? How would they know if they’ve got the level to take the exam?

Take a placement test online (for example at mansioningles.com)

Take a free level test at a good academy, like The British Council or Londinium, for example.

CPE
David says that lower levels need some support from a teacher and a course. It’s difficult to study by yourself if you have a low level.
At higher levels (B2 and higher), students can probably work at home on their own successfully.

David recommends Cambridge practice tests. They have answers, tapescripts for the listenings and a CD.

What are your professional plans for the future?

David loves learning new things. He wants to try different things in the future. He feels that it’s a bit too soon to be thinking about the future of Dawayingles. He’s very happy with his success so far.

He’s trying not to be too over-confident over the success of Dawayingles.

It takes a lot of time to work on the website. He wants to offer the best quality content for free and then create specific content to generate some income from the site.

He has invested some money in his website. He plans to write more articles and do more interviews for the site.

If you haven’t seen David’s website yet, you should go and visit dawayingles.com. There is a wealth of material and information there to help you improve your English.

and through email at: david@dawayingles.com
Please leave a review on iTunes so that more people get to hear about inglespodcast.com and dawayingles podcasts.